How is knowledge generated in the construction sector?

The predominant knowledge about building is based on the experience of thousands of years of building culture in different regions. Consciously, historical buildings were and are destroyed worldwide, because they are contemporary witnesses of a past culture. This is the only way to maintain the falsified history of human culture. In Germany, a planner or an architect must know and comply with about 27,000 laws, ordinances, regulations and standards. He should actually be creative and create a healthy dwelling for the inhabitants.

The modern building industry tries to summarize and unify the experiences in regulations, as well as standards. From the economic point of view in the present, this can be useful. The normative period of use is becoming shorter, and in the construction of the buildings, construction costs and energy can be saved both in the construction time, in the use of materials, and in the renovation. Almost only buildings that are hostile to life are being erected. In the past, on the contrary, long-lasting buildings equipped with human energy were built for the inhabitants in harmony with nature.
Thus, the targeted thermal protection measures prevent the penetration of the life-giving rays of the sun into the building. More under the article Building materials and energy.
Today, the master builder is only a vicarious agent of the respective ruling policy and ideology. See also neoliberal building policy. 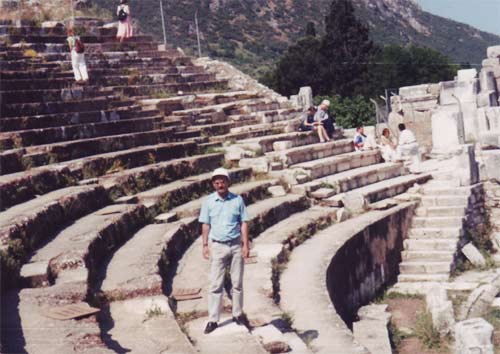 The destruction of ancient knowledge

Every person has a worldview or belief system that is the basis for his perception of reality. If he is exposed to new information, new concepts and ideas, this has a strong effect on his consciousness and endangers his previous world view, which has been shaped by mass mind control and social engineering techniques. He fears everything that does not seem socially acceptable, shuts down his critical thinking and blindly believes the statements of "experts" and authorities. With a traumatic defensive reaction, everything unknown is rejected. For many years, the simple ability to think logically and rationally has been taken away.

There is increasing evidence that our history did not happen as it is currently taught. Therefore, the examples given below may be from a different time period or the libraries may have been in a different geographical location. It is much more important to realize that over a long period of time historical knowledge was destroyed and falsified.

You can show the most valuable book of knowledge to the world a thousand times, but it is meaningless if the person cannot read!

Historically, knowledge was lost through in "accidental" fires of ancient libraries and plagues. Almost simultaneously, the libraries of Alexandria, Athens and Tsargrad (Constantinople) were burned down, as well as the Etruscan library in Rome. Whereas in the Alexandria fire apparently only a small part of the books and scrolls burned and the larger part of this historical knowledge came to the Vatican Library.
The ancient papyrus scrolls in the Temple of Ptah in Memphis and 200,000 ancient volumes and scrolls in the city of Pergamon were destroyed.
There was an almost complete robbery of the collection of Pissistraat in Athens.
A very great importance had the library of Alexandria set on fire, which included 700 000 ancient scrolls and at the same time served as a university and research institute in the fields of mathematics, medicine, biology, astronomy and other subjects.

About half a million ancient books were destroyed by the Romans in the library at Carfagen (Carthage). A similar fate had the Druidic library in Bibracte (France).

The libraries of the Grand Prince of Kiev Yaroslav I Vladimirovich, called the Wise (978-1054) and the Grand Prince of Moscow and Tsar Ivan IV. Vasilyevich the Terrible (1530-1584) disappeared without a trace.
Likewise, with the destruction of the city of Asgard Iryisky (Temple City), now Omsk, 1530 writings still from Daaria an ancient knowledge was destroyed.

The first emperor in China, Qin Shihuangdi, had ordered all books to be burned. Likewise, the "Holy Inquisition" and also the National Socialists in Germany burned books in 1933. Likewise, fires in the Saltikovski- and Lenin libraries in Russia burned many historical books. Current events include the collapse of the historical state archive in Cologne or the fire of the Duchess Anna Amalia Library in Weimar in 2004.

Why is the concealment of ancient knowledge taking place?

There is never secured knowledge. There are only theories, which are refuted, in order to create new theories.
Not only in politics it is easy to lead the people behind the light, it is much more difficult to explain to the people that they were or are led behind the light. Examples are the ozone hole, forest dieback, petroleum reserves, man-made global warming, diesel ban, the disease system and especially our manipulated history (see Anatoli Timofeyevich Fomenko). If the human being does not know his history, he can be steered and manipulated much more easily. For this also an interesting article Megaliths speak by Andre Viktorwisch.

At the moment we are experiencing a profit-oriented and bought-for-hire science. It moves more and more in the direction of a transformative science (abolition of the objective neutral science) in the process of the "Great Transformation", which includes a resource-, mobility-, nutrition-, consumption- and industry turnaround. In connection with this, a drop in IQ can be observed.

Orthodox medicine serves the pharmaceutical industry and the new Germanic medicine serves the people. Building codes and standards serve various industries. The building regulations determine the social behavior of the inhabitants and their state of health. There is no science for healthy living, comparable to the studies of occupational science.

Mankind needs a new form of science. Too many dogmas have been created, so that there are no more chances for groundbreaking discoveries. For about 200 years, nothing principally new has been invented or discovered. Everything that is declared as an invention today are only further developments of already discovered or older inventions.
As long as research and teaching is done according to the downgraded dual patterns of thinking, hardly any significant progress will be made. If in mathematics counting would be done in the ternary system, our knowledge acquisition would be considerably extended and the limited thinking patterns to our environment, to the universes etc. would be dissolved.

Our entire science and society is materially oriented. Matter conditions the spirit. So if the brain does not exist, the consciousness or the spirit cannot exist. It is hard to understand that it is the other way around. The mind conditions the perceived matter (wave patterns that become definitions from information). Through the material view many connections in our nature cannot be recognized. A building is not only a statically calculated and designed structure, but formed a harmony with nature in former times, today it is a hostile storage place for us humans. What are scalar waves? which have long since moved into every household. Which meaning have the vibration field in the building for our well-being.

The time of free science is over!

An increase in knowledge on the part of colleges and universities can hardly be expected, since the majority of research topics are sponsored by industry and only those results are published that serve the interests of the funder or current policy. The desired results then also determine the content of teaching. Essentially, the chair holder has to adhere to these specifications in order not to endanger his or her existence.

The times of value-neutral research at universities and institutes have long been a thing of the past. If, for example, the Potsdam Institute for Climate Impact Research e.V. did not use a simulated computer program to conjure up a catastrophic climate change caused by man, the association would receive considerably less funding. Otherwise, the climate researchers would have to join the ranks of job seekers at the Federal Employment Agency. I have full sympathy for the employees who do everything they can to ensure that the sources of funding do not dry up.

The professionally well-trained lobbyists helpfully assist the people's deputies, and in this way corporate interests are skilfully implemented politically. It would be very surprising if the representatives from industry in the standards committees did not incorporate their company-related interests into the standards.

Why do we hear very few critical voices from the research and academic community. If a university professor expresses himself contrary to the opinion of the official media policy, his future professional path not only becomes rocky, but he is also ostracized. He jeopardizes his career or even risks being thrown out.
Ethically clean science is more and more replaced by authoritarian science.
In addition to this selected quotations:
Prof. Claus Turtur: "Scientists have the reputation of being knowledgeable, in order not to jeopardize their good reputation, they deal with things they know and avoid things they know nothing about. Therefore, science limits itself to known facts and prevents new unknown knowledge."
Dr. Sabine Hossenfelder: "The current organization of academic research rewards scientists when they work on topics that are productive and popular. Careful methods and cautious conclusions are neither productive nor popular." Lecture at the University of Stuttgart "What goes wrong in current physics?" from 14.5.2019

In his "Science not free, but governed by money" Professor Dr. Meyl also addresses the current problems. Here is a recent example from Harvard University.

Correction factors were also invented in building physics in Germany in order to achieve the desired results in thermal insulation. The inventive genius of some of the chair holders is astonishing, in order to keep their well-paid jobs.

The German degree of a Dipl.-Ing. had a high value and also expressed a high level of professional competence. I leave it to other people to judge the value of a Bachelor and Master degree. In the video by Oliver Janich, an extreme at a Western academic training institution comments. Prof. Patricia MacCormack wants to wipe out humanity & teaches occultism. (See at https://youtu.be/066WFZu-tmM .)

Universities train excellent specialists for the system, but they find it very difficult to question and make connections across disciplines because the educational system is geared to repetition of defaults and does not allow for questioning.

Especially the green zeitgeist leaves deep traces in the defacement of our homeland, damage to the natural environment and contributes to the destruction of our business location. For example, uneconomical windmills on every hill or the destruction of German building culture through Styrofoam facades.
Saving energy is right, but not at the expense of our valuable environment and the health of its inhabitants. Ecologically healthy housing can only be created and maintained by the safe provision of inexpensive energy. At the same time, however, it also safeguards national prosperity.

Here is an example of how in Azerbaijan a house can be built for 100 years from stones, sticks and manure in only three days. (Picture from article by Andre Senushkin)

Germany has one of the most expensive energies in the world due to the energy turnaround. The German economy is primarily geared towards exports. How long the industry will be able to withstand international competition with this price difference is only a question of time. Some of the energy-intensive industries are already gone, see the consequences of the energy turnaround.

The science magazine that is still about real science!

*)The sun cult, like all others, is an imposed religion which does not correspond to our true human spirituality. It is not a religion of nature.

To Part 14 The building envelope and occupant health